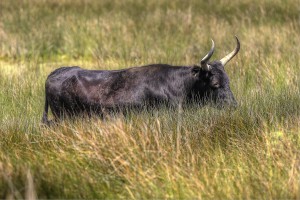 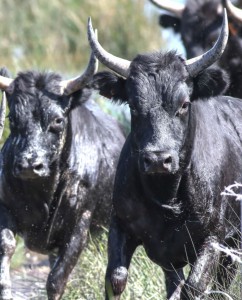 "Biòu" is the Provençal name for bull; king of the Course Camarguaise (Camargue race). The presence of bovine in the Camargue has been noted since the Antiquity. Around 2 km upstream of the town of Arles, bones of bovine with horns in the form of lyre were found, mixed with skeletons of horses similar to those of Solutré (prehistorical site).

Shaped by the environment in which he lives, the Camargue bull is a rustic animal, he lives in herd called "manade", in semi-freedom on land unfit for cultivation on which grow only reeds, salicornes… Very often in winter, the breeder (the manadier) brings him hay in addition.

Under a shining black coat, this animal is imposing but relatively light, 1.40 m on average for males and 1.20 m for females, for 250 to 400 kg. Its horns are the most characteristic feature of the breed, they run vertically towards the sky generally taking the form of a lyre. The Camargue bull could never be domesticated and its combativity helped to preserve the breed. It is essentially raised for the Camargue race. Like the foal, the calf will be branded at 1 year old (ferrade), emblem of its manade.

First French bovine meat to be rewarded by a label since 1996, the AOP label “Bull of Camargue” owes its particular character to the herd breeding natural conditions. 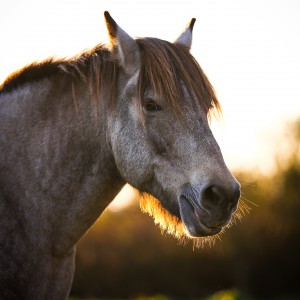 The Camargue horse is a medium sized rustic saddle horse. It is recognizable in adulthood by its light gray coat. The foal is born bay brown and its coat clears at the age of 4-5 years. The Camargue horse, commonly called “le Camargue”, would be one of the oldest races in the world even if its origin remains a great mystery.

This breed is known to be one of the most robust since it is perfectly adapted to the Mediterranean harsh climate: violent winds, humidity, biting cold in winter, great heat and insects in summer; hence its nickname of a horse " Made of Mistral (wind name), salt and courage ". Its clear coat does not attract mosquitoes and its highly resistant skin protects him from insect bites. 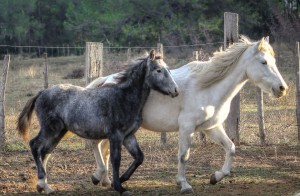 The Camargue horses are raised in semi-freedom in manades (herds of bulls and horses in the open air) and are the exclusive mount of the guardians (manade keepers). The foals are born from April to July in full freedom without man intervention. He is a working companion of the guardians, he knows how to prove himself indispensable in the trials of cattle sorting. Courageous, lively and voluntary, it is particularly enduring.

"Camargue" is the official name of the breed according to the national stud since March 17, 1978; signed on the commune of Saint-Laurent d'Aigouze. 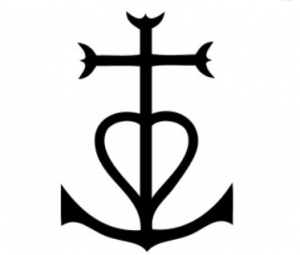 The story of the cross of Camargue

The Marquis Folco de Baroncelli is named as being is initiator .

From the twentieth century, the Marquis is working with others to reconquer the purebred Camargue, he participated in the codification of the nascent bull game. In 1909 he created the "Nacioun Gardiano" which aims to defend and maintain local traditions.

In 1924, he asked Paul Herman to design and draw the Camargue cross symbolizing the “Gardiane Nation”. The original cross is performed by Joseph Barbanson from the Saintes Maries de la Mer, a blacksmith artisan.

The cross, set on an anchor and equipped with tridents expresses three symbols:
• Faith with the cross
• Charity is represented by the central heart
• Hope with anchor ended with three ends of tridents 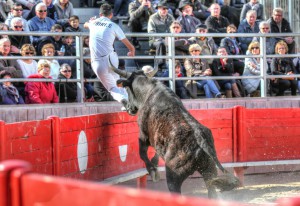 … Or the “cocarde” race, or the “free” race… A very old Provencal game in which for generations, men and bulls have been competing; the bull trying to proudly keep the “attributes” (ex: the cocarde) fixed on its forehead. Codified during the 19th century, in 1975, Camargue racing became a sport in its own right.

The raseteur (man dressed in white) confronts the “cocardier” (bull holding the cocarde), using a hook, he must strip him of the attributes (strings, cockades and acorns) attached to his horns. Each unhooked attribute is rewarded.

The Camargue bull is very agile and can surprise the best raseteurs, even the quickest, offensiveness, brilliance, intelligence of combat will make him a God of the arenas. The bull run lasts fifteen minutes.

Then the bull will return to the manade (herd) and will not make another race until two or three weeks later. The “cocardier” run about six or seven times a year. At the end of their career, around fourteen or fifteen, they will spend a peaceful retirement in the manade. When they die, some will be buried upright, their heads turned towards the sea, with statues bearing their effigy. The big cocardiers never loose their notoriety and the whole Camargue still dreams of the exploits of "Vovo", “Garlan” or "Sanglier".

It is the hope of any manadier to bring out of his manade a bull which will have testified of the greatest combative value. His name will register with the hearts of aficionados, those lovers of Camarguaise races gestures.

The bull is of all the festivals. During "the fête votive" the whole village lives to the rhythm of the abrivado and bandido. The big afternoon Race after the traditional nap. 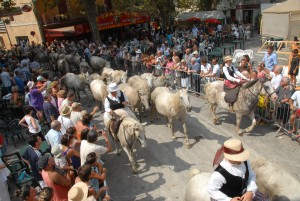 Village Festival-  It always starts on the first week-end after August 15th and lasts for 10 days.
This festival is one of the most famous in the area because Saint-Laurent keeps alive and intact the Camarguais traditions. 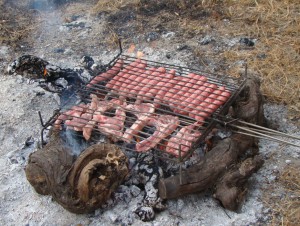 Every day: Animations with orchestras, fairground... 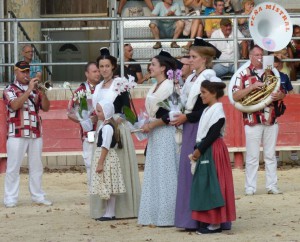 Paintings exhibition throughout the village 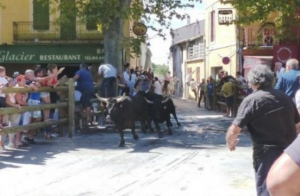 Abrivado - This is the moment when the bulls are led from their pastures to the bull-ring surrounded by horses around midday
Banbido - It's the reverse. The bulls are led back from the ring to the pastures surrounded by horses after the game in the evening.
Course de protection - Games organised with "raseteurs" beginners and young bulls
Encierro - Bulls wearing protections at the end of their horns run wild in some selected barricaded streets of the village
Ferrade - One year old bulls are selected , they are branded with  the emblem of "la manade" and their birth year
Gardian  - He is a sort of cowboy, riding horses, he takes care of the herd
Manade - A herd of bulls or of horses
Manadier - He is the owner of the herd of bulls or of horses
Taureau jeune / young bull - This bull has already been involved in games but not often, it has to confirm its qualities. It is 4, 5 or 6 years old
Taureau neuf / new bull - A bull that has never been in games before
Toril / Bull pen - Place in the bull-ring where the bulls are kept before the game. It has got two issues, one to embark and disembark the bulls and one opening into the bull-ring. At Saint-Laurent d’Aigouze the ring is listed a historic monument, because it was built leaning against the sacristy of the church
Trident - Spear ended by a three horned steel device, used to work with bulls